Come sit at the bar and drink a beer with me.

There is nothing I love more than talking with people over a couple of pints. Add a great pub with great beer and it makes my night fantastic.

Something I learned from my Dad was how to talk to people. How to be friendly and how to carry a conversation with anyone about anything. While at a pub, sitting at the bar I have watched my Dad become a friend to many and share things I’ll never forget. I aspire to have that kind of skill like he has. Once my Dad knows the person at the bar, he remembers the littlest of things to make the conversation about them.

“How’s the new house?” “How is your son doing at his new school”

Things like that make sitting at a bar with him so unique and refreshing. Of course, I’m not always at the pub with my Dad and so I take on the role of conversation starter. The main thing I learned is a beer should be shared with Family and Friends.

While home in London (South Western Ontario) I get to have quite a few beers I don’t have access to here in Kingston (Eastern Ontario). Such things include Railway City Brewing based out of St. Thomas, Forked River (London)or Anderson Craft Ales (London). 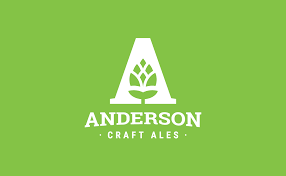 Link to a post I made about Anderson Craft Ales.

Every time I am home my Dad is excited to share the beer he bought for me and asks if he picked good ones and what I think of them (He always picks great ones). The key here is, he always gets two of each. One for me and one for him. That way we compare how it tastes. As we drink the beers we talk about how our days have been, how was work or school, but also that way the beers taste. Obviously not everyone has someone in their family writing a blog about beer, and so they don’t go into detail about the hops in a certain brew, but you should! I have found a great connection with both my parents over good beers. Even further, getting to talk about beer with my sister and her fiancé.

It’s appropriate to mention talking with friends and family today because today is Bell Let’s Talk day. Now, I won’t go into how Bell and the top the mobile companies refuse to make competitive prices, but what Bell is doing today, and all year long, is raising awareness of mental health. So while you’re sitting down, drinking a beer, feel free to send a tweet with #BellLetsTalk, or call a friend you haven’t heard from in a while, or just ask the person next to you how they are doing. You never know how much that can change someone’s day.

Firstly, everyone who’s had a beer, whether you enjoyed it or not, has had a lager. The Lager is what I consider the entry level beer. It’s the beer often used for parties, concerts and sporting events but I’m not saying there is anything wrong with that; In fact I really enjoy a lager here and there. Unfortunately it gets a bad rap by a lot of beer enthusiasts. This is because most craft breweries focus on Hops, Spices and big flavours. A lager shouldn’t be any of those things and therefore is brushed aside for IPA’s and Stouts (among many others).

Except every once and a while a Craft Lager will pop up from a brewery and I get to enjoy a simple refreshing beer. The first one that comes to mind is Muskoka Brewery’s Craft Lager. It features a light refreshing fizz without any murky aftertaste at all. What I mean by murky aftertaste is that often times a lager that has been heavily processed, or mass produced has a lingering flat taste after sipping. A lager should not linger. 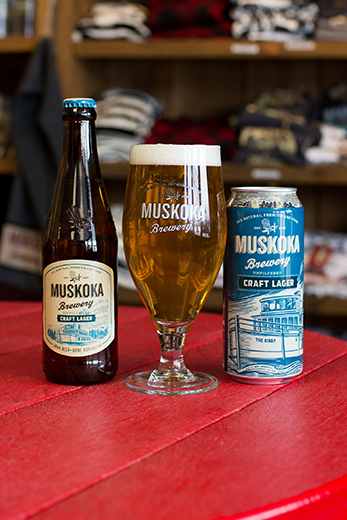 This brings me to Beau’s Lug Tread Lagered Ale. What does that mean? Well it means it is a Kölsch. What’s that? It is a Lager. Yes, a bit confusing, but stay with me. Lager is an umbrella term for how the beer is made. It has to do with the yeast and what temperature the beer was kept at during the brewing process which is generally colder. I won’t go into details because I wouldn’t get it right anyway. Besides, what is important is Lug Tread is a great beer to show off to your friends that you drink craft beer. Beau’s nailed the semi-sweetness of a lager with the contrast of hops. A great beer for year-round drinking and since it’s their flagship beer they have it available everywhere in bottles and most recently in short cans. 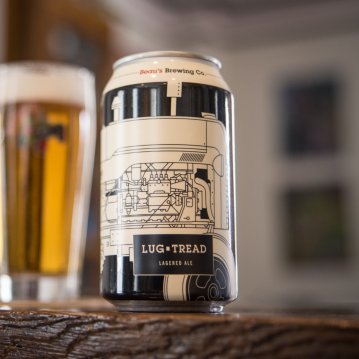 Most recently I had Beau’s “Lamb’s Wool” Apple and Spice Gruit. Just about everything in this beer is organic which I find pretty cool. Apples from Quebec, Spring Water from near the brewery and real cinnamon and cloves. The apple juice was very apparent with a blanket of spice making this a very flavourful but lightweight beer. With much tinier bubbles than the Lug Tread this Gruit doesn’t fill you up nearly as much. Typically a Gruit would make up for the lack of heavy hops with boat loads of spices. This one found a happy place between spice and the tang of apple juice to produce something quite tasty. Conveniently February 1st is International Gruit day, and I wouldn’t look any further than Lambs Wool for that day.  I would love to have this beer sitting outside under a warm sun, but that will have to wait.

In the mean time, Beau’s has their annual month long event “FeBREWary”. Every week for 5 weeks, Beau’s releases a new beer! Check out their website for the list a beers and where you can get your hands on them, including local pubs. I will also be grabbing these as well to write about. http://www.beaus.ca

A beer that is much more appropriate for this season is actually another Beau’s I had this week. “Dunkel” is also technically a Lager, but if I’m using Lager as an umbrella term then Dunkel is getting a bit wet. While the brewing process is fairly similar, a Dunkel features a much more dominant malt flavour. I describe malt as a salty caramel flavour that often feels a little heavier. The reason this beer would be good for colder weather is the natural warmth it gives after a nice big sip. It’s like a softer version of the warmth you would get from a decent scotch or bourbon (neither of which I can claim I’m an expert on).

When I first started trying new beers I simply picked the coolest name or the coolest looking label. I’ll admit that I still sometimes do, but now I am able to understand what I’m getting myself into based on the style of beer the brewers claim it to be.

I hope that learning a bit more about Lagers will help you choose some off the shelf. Of course there are plenty others that one day I will get to including Helles, Bock and more proper Kölsch.

To start off, welcome!

If you know me then you know I really enjoy not just drinking beer, but talking about it and sharing it with others. My enjoyment of trying different beers actually started well before I could legally drink.

Root Beer. I loved trying new root beer. Still do actually. My family and I were on our way back from Punta Cana and had landed in Detroit. We stopped at this Texas BBQ like restaurant that had tall wooden ceilings and a gift shop on the side. My love for root beer started when I first found out about Dad’s Root beer. An old fashioned American Root Beer that at the time was still owned by the Dad’s Root Beer Company. A Completely normal drink to American’s and probably to a bunch of Canadian’s too, but brand new to me.

It was so much sweeter than the Diet Barq’s I had been used to. Of course as a kid this excited me. From then on whenever my family went to a new restaurant I would ask for a root beer if it was one I hadn’t had before. Or if I was in a corner store that had some new pop company like Jones or Pop Shoppe I had to grab some. At the time a cute little hobby that my parents thought nothing of.

Skip ahead to when I was 18. Just about to turn legal drinking age. Oh my! My sister was just beginning University at Queen’s University in Kingston Ontario. The night we finished moving all of her things into her place we were trying to decide on where to eat. We didn’t feel like going somewhere fancy due to the fact we were exhausted from moving and cleaning.

Then comes The Kingston Brewing Company.

By this time I have had a few beers, all by permission of my parents of course. My interest in different beers had started to grow and the sight of this pub cracked open that thought like 1 inch ice under and elephant. 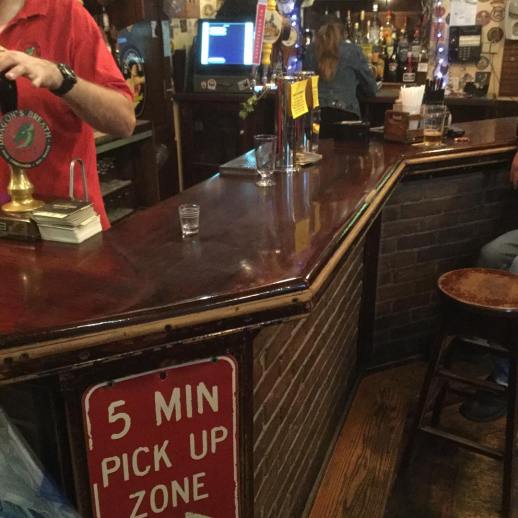 The Brew Pub, as the locals call it, at the time had a modest but respectable offering of craft beer. Beers included Steam Whistle, maybe some Great Lakes Brewing Company and possibly Muskoka Brewery. The highlight however, was that fact that they brewed their own beer and was the oldest Brew Pub in Ontario! Their Dragon’s Breath Real Ale (now called Cask Ale), Dragoon’s Breath Pale Ale, WhiteTail Cream Ale, and Regal Lager were all present the first time I visited and they all remain to this day. However, the real highlight for me was they also make their own Root Beer! Well, to be more accurate, sarsaparilla. I remember having the same smile on my face as I did when I first had Dad’s Root Beer all those years ago.

That was the start of many years of creating friendships,  and creating memories and drinking delicious beer along the way. The good folks at the Brew Pub have become a sort of family and as my Dad say “There’s no other restaurants in Kingston!”

Now I enjoy trying new Craft Beer from all over Ontario. I hope to share these kind’s of stories with everyone, and talk even more about certain beers I have enjoyed, and even beers I regret ever having. 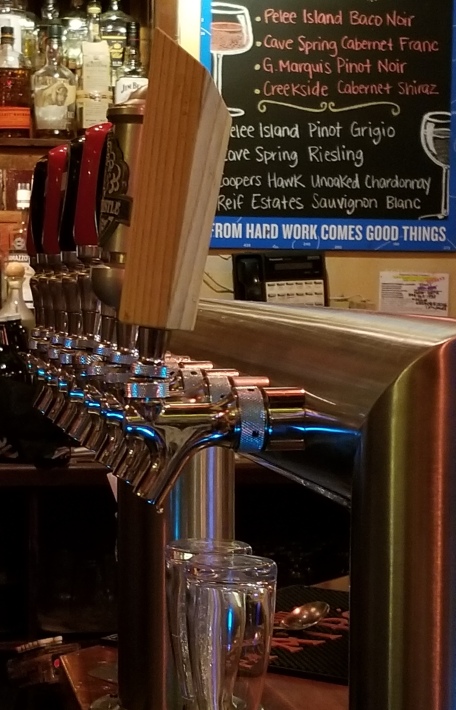 Some of the new taps at the Brew Pub.