Long time no write. I’ll admit, there has been plenty of time for me to write something, but never had anything worth writing, or at least to write in a way that would spur any interest, and that’s O.K.

However, I have had quite the month. Much of it working, and much of it enjoying some pretty darn good beer. For starters, I had the great opportunity to have a 3 week internship at the Canadian Opera Company. More specifically, the Education Department. Such great people work there and they made the experience a fantastic one. I had the chance to speak with members of the Ensemble Studio, a high level training program for young opera singers. They made me feel a lot more confident about pursuing a career in opera, particularly with giving me a timeline of things I need to do to accomplish that. Of course, since the Canadian Opera Company is in Toronto, I also had the opportunity to try some local brews.

Unfortunately (except not really that bad) I didn’t have a lot of free time and was only able to visit Bellwoods Brewery. The first thing you see at the place is a cool wall of chalk drawings and an assortment of glasses. Then you realize that the place is packed and there is already a line of people behind you. It was crazy for such a small place how many people they were able to squeeze in. Fortunately I timed it perfectly and was able to get a spot at the bar. 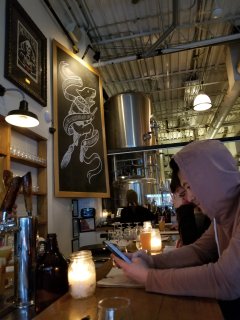 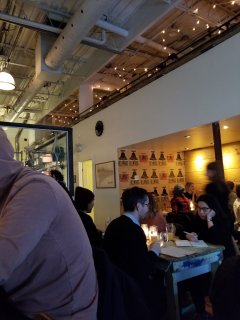 As for the beer, lets say Bellwoods is knee deep into Juice, and I loved it. I started off with their Pineapple Milkshark IPA, what a rollercoaster of a name, as was the flavours. It is literally (but actually figuratively) pineapple juice with some orange in there. On the nose it smells like your going face first into a tropicana commercial. I had to take a few swigs to start tasting anything that resembles beer. The lack of bubbles reinforce the juice motif, with subtle hints of hops it reminds you to not drink this like a morning glass of OJ. To address the MILKshark part of the name, the beer is brewed with lactose sugar, which essentially gives it this easy going sweetness, and creaminess you wouldn’t otherwise be able to achieve with just fruit juices and wheat. The Milkshake IPA is a beer that is great when done right, such as this beer, but could be a strike out looking if done poorly. There’s not much of a middle ground there.

During this month I had a pretty cool assignment to work on. I had to design an app, it could be any app I wanted, so of course I tried my hand at making a Craft Beer app. I pooled inspiration from Untapped,Spotify and the LCBO app of all places. Essentially the idea was to create an app where you could “like” beers, and gradually the app would suggest beers for you. My ideal audience is someone who is just getting into craft beer and needs a little help with getting going. Of course the point of the assignment was to make something that made things easier for the user, but also lasted a while. For being my first attempt at designing anything I thought it went pretty well. 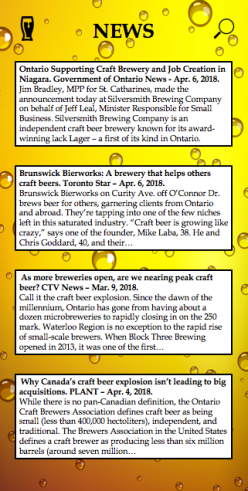 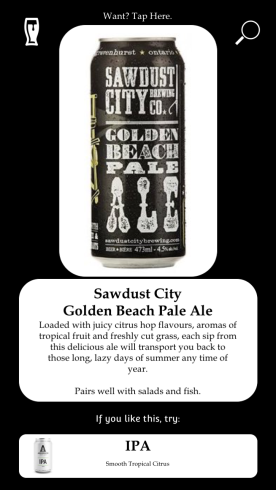 Whether or not I pursue this as a legit app is a whole other story.

Finally, I had this new idea of pairing beer with music. By new I mean, I’ve had this idea stowed away for a long time, but never felt it would make sense, but here it goes. 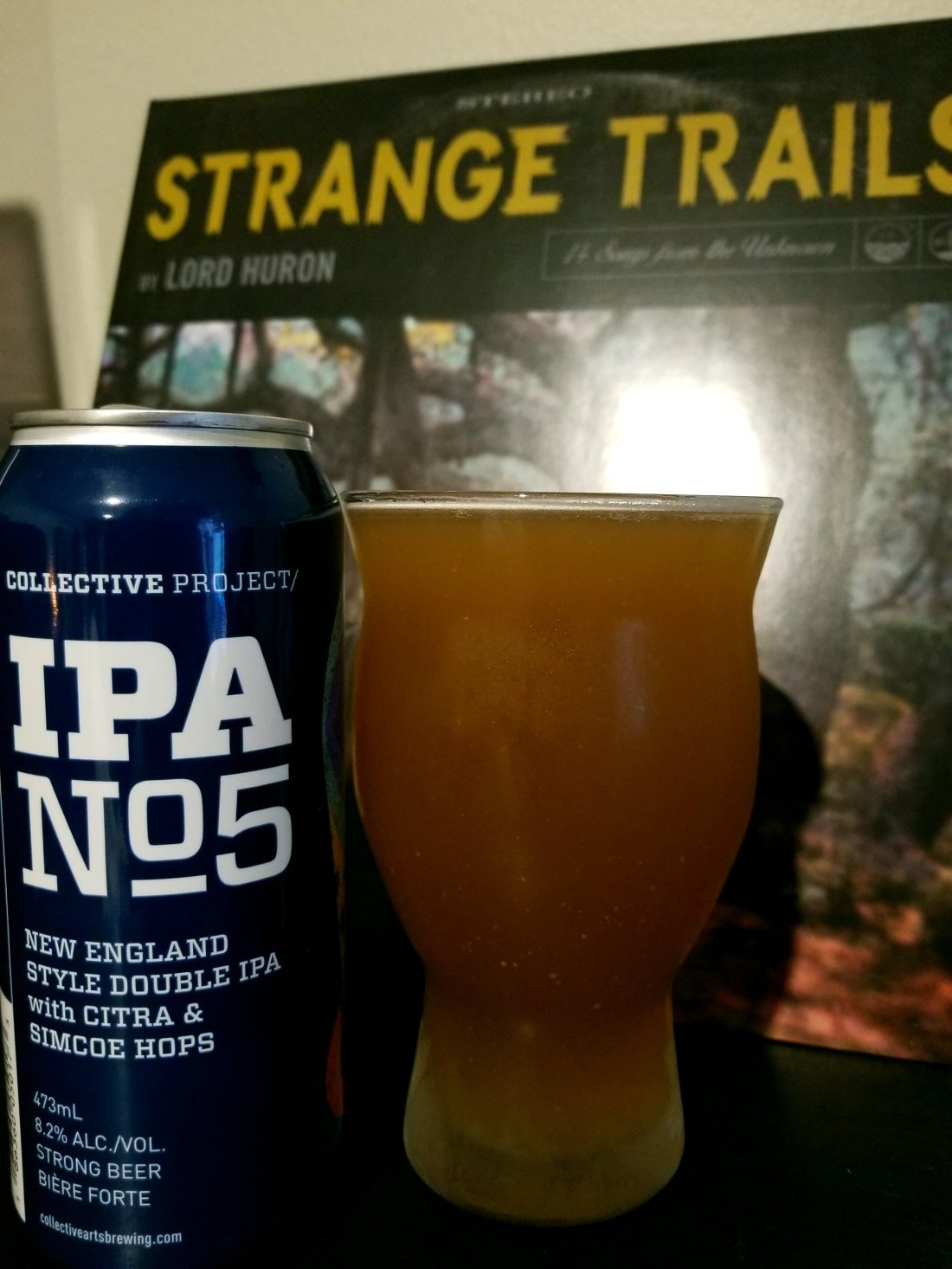 Let’s start with the beer.

A dark and stormy beer with hints of yeast dripping down to the bottom of the glass. The cloudy hue of gold and brown rise up to a thin head (mostly because I poured it poorly). Immediately I smell a sweet piney hops. First sip is a whirlwind of malty goodness closely followed up by that pine tree of hops. The Citra Hops pop out quite nicely adding that sweet bit of citrus that is used a lot these days. A nice clean beer and quite easy going considering it is 8.2%. It has a nice warm finish, and echoes the hops back to you.

As for the album, the mood is set right away from the first track Love Like Ghosts. The typical style of Lord Huron is the feeling of sitting in a cave listening to an intimate singer and his full stringed orchestra of folk guitar, bass and an assortment of percussion. The melody is sweet, just like the citra hops. The notes give you the feeling of leisure and comfort, but when you listen to the words, the melancholy and honesty changes the mood. Much like how hops can be a little bitter. Some genius might even call it bitter sweet.

Then the party arrives

Until the Night Turns is much more upbeat, fun and has that classic beach rock beat. A perfect fit for the 8.2% this beer carries. It’s a song about dreaming this is your last day, so why not have fun? Of course once that world has ended, you’ve got Dean Man’s Hand. A groovy old fashioned tune suitable for a slow sipping brew. And because not everything can be doom and gloom, have the view that things will all work out, Hurricane (Johnnie’s Theme) tell us that sometimes you’ve gotta be the one to make it that way. About halfway through this beer you sort of fall in love with the flavours, as does this song La Belle Fleur Sauvage or The Beautiful Wild Flower (almost like a blooming hops).

Now, after 20 minutes of this album you find yourself in a bit of a blurry soundscape of folk, countryside and hops. The album swings back and forth between slow and fast from Fool for Love and The World Ender. Two tunes that make you want to watch an old spaghetti western. Meet Me in the Woods is one of their more electric songs, which is very similar to some of the new songs they have released from their new album coming out this Friday (April 20). The maltiness of the beer is finally featured in The Yawning Grave, a lovely waltzing lullaby. Makes you feel all warm and fuzzy inside. The great thing about Lord Huron’s albums is many of the songs seamlessly move into one another. The Frozen Pines may be an obvious connection, but when I try to describe how hoppy a beer is to anyone I use a Pine scale. This beer is a large branch off the pine tree, which means its fairly hoppy.

Cursed is how you will feel after trying this beer and knowing that you will probably want it again, but will have a hard time because everyone else already bought it. Way out There is nearing the end of the album and subsequently the beer as well. The song sings of reminiscing of a long journey. Maybe you took your time drinking this brew, maybe you’ve moved onto your second? Either way, this song will make you think, and with the IPA, it will make you think deeply. Slowly each sips becomes smaller and smaller, grasping as the last sweet drops, a small tornado at the bottom of the glass of hops, yeast and bubbles each time you set the glass down, settling into Louisa. This is a memorable beer, which doesn’t come by too often. How ironic that the name is simply IPA No. 5. The final song on the album is easily the most popular due to Netflix’s Original series 13 Reasons Why.  Used as the anthem for the show it adds a second layer of sadness.

That and you’ve probably finished the beer by now.

Check out the album here:

View all posts by spencervassbeer